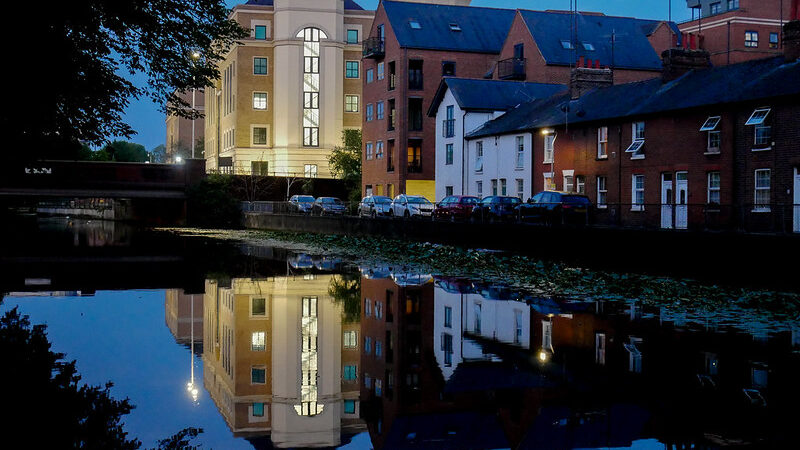 Reading has a long history of individuals prepared to make great sacrifices for their faith.

The Catholics Hugh Faringdon, Abbot of Reading and two other priests died for their beliefs in our market place. A few years later Reading’s schoolmaster Julius Palmer wrote a book criticising the burning of Protestants and died for promoting toleration.

During the civil wars Reading people raised a regiment “By the People, For the People,” to protect religious freedom.

We have never been afraid of holding a faith strongly, so long as we do so with love and respect for others. In their different forms of expression and belief, all religions can make us better at being human.

The first Reading Interfaith Group meeting was held on Tuesday 23rd April 1985 at the Friends Meeting House. A focus on “Some Spring Religious Festivals” provided an opportunity for members of different religious traditions to meet and explore the possibility of starting a Reading inter-faith group linked to the World Congress of Faiths”

Reading Interfaith Group is one of the oldest groups of its kind in the country. It remains focused upon its aims and the shared opportunity for friendship.

“Our innermost prayer should be that a Hindu should be a better Hindu, a Muslim a better Muslim, a Christian a better Christian. I broaden my Hinduism by loving other religions than my own…. All religions are true”

Our monthly newsletter is the main way in which we keep in touch with our supporters.
View Calendar

We use cookies on our website to give you the most relevant experience by remembering your preferences and repeat visits. By clicking “Accept”, you consent to the use of ALL the cookies.
Cookie settingsACCEPT
Manage consent

This website uses cookies to improve your experience while you navigate through the website. Out of these, the cookies that are categorized as necessary are stored on your browser as they are essential for the working of basic functionalities of the website. We also use third-party cookies that help us analyze and understand how you use this website. These cookies will be stored in your browser only with your consent. You also have the option to opt-out of these cookies. But opting out of some of these cookies may affect your browsing experience.
Necessary Always Enabled
Necessary cookies are absolutely essential for the website to function properly. This category only includes cookies that ensures basic functionalities and security features of the website. These cookies do not store any personal information.
Non-necessary
Any cookies that may not be particularly necessary for the website to function and is used specifically to collect user personal data via analytics, ads, other embedded contents are termed as non-necessary cookies. It is mandatory to procure user consent prior to running these cookies on your website.
SAVE & ACCEPT